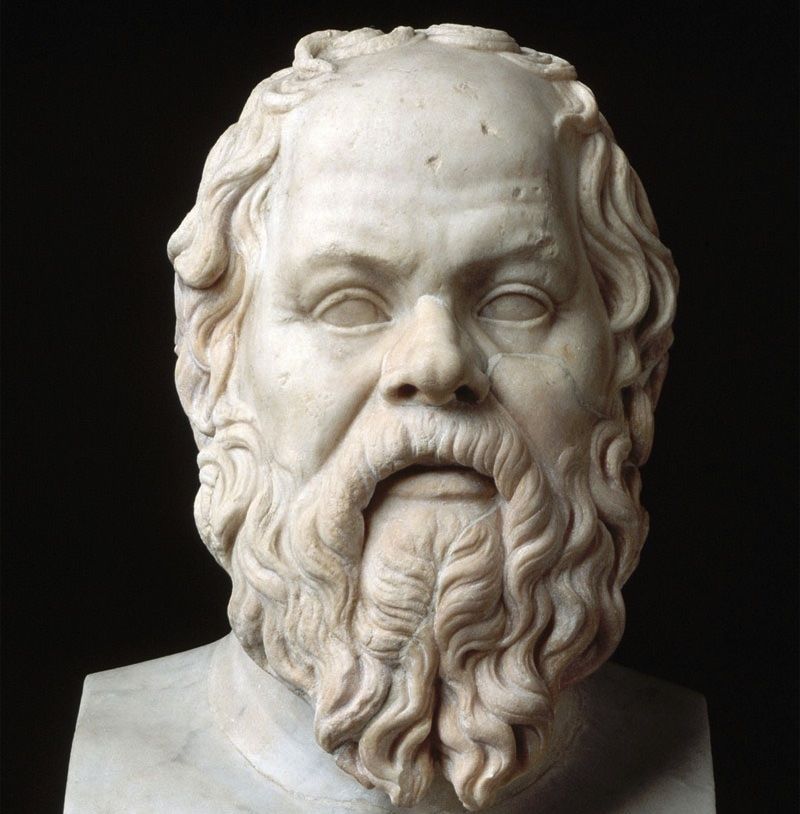 SOCRATES (470-399 B.C.) Athenian philosopher, teacher of Plato. Socrates is one of the most significant yet most enigmatic figures in the history of philosophy: significant because his relation to Plato was crucial to the development of the latter, and thus indirectly to the development of much later philosophy; enigmatic because he wrote nothing of himself (p. 880, Oxford Companion to Philosophy).

PLATO (428-347 B.C.) The best known and most widely studied of all Greek philosophers. His contribution to philosophy was the Theory of the Forms. These are entities which represent the highest forms of truth known to mankind (Love, Justice, etc.)

ARISTOTLE (384-322 B.C.) Student of Plato and a teacher of Alexander the Great, he was the first philosopher to create a comprehensive system of Western philosophy.  He wrote extensively on morality, logic, politics, aesthetics, and religion.

EPICURUS (341-270 B.C.) Athenian philosopher who adopted Democritus' atomism. Epicurus argued that the universe consisted of matter and void. The gods are inactive and far off. The good life is secured by kindness and friendship with those about you, and by moderation of appetite so that , although nothing is forbidden, he who measures his desires by the utilitarian standard and needs least has the firmest grasp on happiness (p. 258, Oxford Companion to Philosophy).

AUGUSTINE (354-430 AD)  One of the decisive developments in the western philosophical tradition was the eventually widespread merging of the Greek philosophical tradition and the Judeo-Christian religious and scriptural traditions. Augustine is one of the main figures through and by whom this merging was accomplished. He is, as well, one of the towering figures of medieval philosophy whose authority and thought came to exert a pervasive and enduring influence well into the modern period and even up to the present day, especially among those sympathetic to the religious tradition which he helped to shape. But even for those who do not share this sympathy, there is much in Augustine's thought that is worthy of serious philosophical attention.  (from the Stanford Encyclopedia of Philosophy)

THOMAS AQUINAS (1224-1274) Greatest of the medieval philosopher-theologians. He drew a distinction between two routes of knowledge of God. One is revelation and the other is human reason. Aquinas believed it possible for people to reach the truth about God without the aid of revelation, by arguing, in particular on the basis of the facts of common experience, such as the existence of motion in the world (p. 45, Oxford Companion to Philosophy).

RENE DESCARTES (1596-1650) He was the chief architect of the 17th Century intellectual revolution which destabilized the traditional doctrines of medieval and Renaissance scholasticism, and laid down the philosophical foundations for what we think of as the modern scientific age. His most famous quote was probably, "I think, therefore, I am." (p. 201-205, Oxford Companion to Philosophy).

IMMANUEL KANT (1724-1804) Perhaps the most important European philosopher of modern times. The central concern of Kant's greatest masterpiece, The Critique of Pure Reason, is with the possibility of metaphysics, understood as philosophical knowledge that transcends the bounds of experience. In other words, one could reason out the truth about God, existence, etc. by observing the laws of nature and drawing highly rational conclusions. In other words, God must be a creator of order since the natural world operates on the principle of order.

JEREMY BENTHAM (1748-1832) English philosopher who founded the school of Utilitarianism. He did not invent the principle of utility, but he did devise the first comprehensive theory of utilitarianism. Primarily concerned with ethics, he believed that "the greatest good can be achieved by consulting the greatest number of individuals, and acting in accordance with their wishes."

JOHN STUART MILL (1806-1873) He was the greatest British philosopher of the 19th Century. His work, The System of Logic, published in 1843, made his reputation as a philosopher. The leading element of Mill's thought was his lifelong effort to weave together the insights of enlightenment and romanticism (p. 599, Oxford Companion to Philosophy).

FRIEDRICH NIETZSCHE (1844-1900) German classical scholar, philosopher, and critic of culture, who became one of the most influential of all modern thinkers. His attempts to unmask the motives that underlie traditional Western religion, morality, and philosophy deeply affected generations of theologians, philosophers, psychologists, poets, novelists, and playwrights. He thought through the consequences of the triumph of the Enlightenment’s secularism, expressed in his observation that “God is dead,” in a way that determined the agenda for many of Europe’s most celebrated intellectuals after his death. Although he was an ardent foe of nationalism, anti-Semitism, and power politics, his name was later invoked by Fascists to advance the very things he loathed.  (Brittanica Academic Edition)

JEAN-PAUL SARTRE (1905-1980) French existentialist who shaped much of the prevailing intellectual thought of the West during the 20th Century. A playwright, novelist, political theorist, and literary critic, Sartre reasoned that existence is meaningless unless one can derive his or her own purpose within the greater spectrum of non-reason and hold to it.

ALBERT CAMUS (1913-1960) Algerian French philosopher who is best known for his concept of the absurd, which he described as a "widespread sensitivity of our times" and defined as a confrontation between our own human demands for rationality and justice and the "indifferent universe." His best known works, The Stranger (1942), The Plague (1947) and The Fall (1956) explore this conflict.